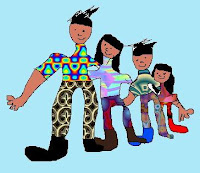 My initial reaction when I saw this week's prompt at Sunday Scribblings? - "Collector personality - I have that - I collect clutter and my house collects dust!".

Then I scolded myself. "Liza, you can do better than that."

"Collector Personality" - what does it really mean? I browsed through some of the postings and I found Guatami's exposition in Rooted quite excellent. I like the way she expounded this prompt.

For me, "collecting" is a good hobby. It does not matter if it's big or small, extravagant or mundane, the point is - collecting allows us to focus on an interest with passion.

I have heard all sorts of collections, but there's one that I found very interesting. When I was in the Philippines, starting my career in Human Resource Management, I was employed by one of the top banking corporation there. Because they didn't have a permanent position available, I decided to move on to another bank who offered me a permanent position with an attractive compensation package. On my last week at the former bank, our manager called me for a "farewell rah rah". He gave me some encouraging words, thanked me for the time I spent in their company, and told me he wished they can offer a permanent position to me.

Then he asked if he can make a copy of my resume for his "personal collection". "I collect resumes", he said. I thought that was weird. But then he explained that he believes in collecting resumes of people who he thinks has potentials for success. Wow - imagine how flattered I was. I thought for a moment - is this guy serious? But as I listened more to his explanations, I realized he was. And then I thought, oh, that is why he's the top manager of Human Resources on this successful bank. He does have passion for "human resources". That short meeting was more than 20 years ago, but I still clearly remember it. Now I wonder if he still has my resume. I wish our path will cross again so I can let him know that in a way I am living a successful life, and so his act of including my resume in his "resume collection" was worth it :)

I have collected stuff here and there but never really got so serious as other serious collectors do. Come to think of it now, it's not really dust and clutter that I am good at collecting right now. What I have is a precious collection of my kid's arts ... that to me is "priceless". A sample is the above picture. It is a computer generated picture of our family created by my son G when he was 8 years old.

For more scribblings on this "collector personality" prompt, visit Sunday Scribblings.
Posted by Liza on Maui at 2:15 AM

How interesting: a resume collector. I would be flattered too if someone asked to save my resume. Most of mine are stored in circular files spread out across the state.

That is priceless artwork! I love it! The kid's got talent!!! I am across the country at a counseling conference and it felt like home to check your blog. Love you Liza girl!

I've never heard of a resume collector, although I keep family resumes on file. Periodically someone phones to ask me to e-mail their latest resume to them - the hard copies disappeared. I wonder if they think I'm a collector. :)
I enjoyed your post!

nice art liza. it actually caught my eye when i opened your page. your kid has talent. =)

I wonder what it would be like to compare the resumes he collected with where the people are now.

Clearly, that man was a heck of an administrator, the kind of manager we wish all companies employed more of. A great story.

Hey Liza, thanks for appreciating my post and linking it too.

I never heard of any one collecting resumes. This is the first time. I don't consider it weird like a few collecting toilet papers. In fact I think he was very far-sighted.

PS: You got my name wrong in there!!

A resume collector. I can just hear him name dropping, oh yeah I knew so and so, see here's his resume. I prefer the more ordinary hobbies.

I used to collect stuff as a kid but don't so much any more. Perhaps now I like to collect experiences! Anyway, great post thanks for sharing about this interesting and unusual collector!

Here is one for you. I am a member of a club that collects TV and FM radio stations. We don't own them, we just try to receive as many stations as we can on our equipment. certain atmospheric conditions allow TV and FM stations to be received hundreds and even thousands of miles away. we keep careful logs of the stations received and try to document the TV stations with photographs. If you are curious, check out our website. http://www.wtfda.org/index.php