The prompt for this week’s Sunday Scribbling is slippery. Too many things come to my mind when I hear the word slippery. One thing fun that I can share is our “wedding reception” which was highlighted by a Giant Slip and Slide. It’s slippery alright!

B and I were married in the Philippines. Only a few of his friends were able to come. Due to all the immigration hurdles we had to go through, it took me a year before I was able to come to Maui. Instead of doing another wedding on Maui, a grand reception was planned. It was held in a huge private park in Wailea. There was a nice size hill and our friends laid out a loooongggg white plastic like a carpet and a water hose. B and I were the first one to get down the giant water slide, on top of a boogie board, both of us wearing beautiful lei. Instead of walking down the aisle on a nice white carpet, we slip down the hill on a slippery slide!

I will post a photo later after I scan it (no digital camera back then). In the meantime, I posted the video above to show the kind of slip and slide we had :) 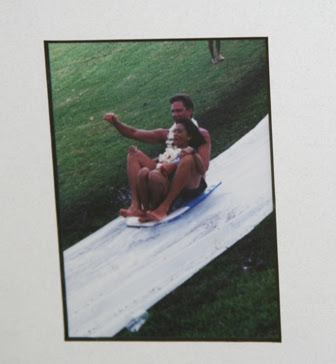 How very original!!!! PLease do post that photo, it woudl be great to see.

Love it. What fun! Look forward to the photo.

Now that's the perfect way to celebrate taking the plunge.

Fantastic idea! I hope you find the pictures. :)

What a wonderful way to celebrarte the big day! I too found myself drawn to the slip n' slide with this prompt.

What a great way to celebrate!

What fun! I always wanted a slip and slide when I was a kid, and I only remember getting to use one once or twice, so naturally, my kids have had them, and I join in the fun!

Wow slipping right into a life together - fantastic!!

a slip and slide wedding! omg! too cool! when you renew your vows, can i come to the wedding so i can use the slip and slide. i used to love mine as a kid. totally forgot about them until i saw your post.

What a perfectl original wedding. I'm sure that people must still be talking about it. Excellent!