The House Of Darwin

My "Sincerely, Fro Me To You" post this week is once again part of my high school reunion series. Below is an article written by my former classmate Arlene Alonsagay, who we fondly called "Chagay", and her sister Chato. I asked their permission to post it here because it brought back a lot of fun memories I had in high school. I apologize if some of them are too personal that you can't relate and have "no idea what we're talking about". Please indulge me on this as we are celebrating our 25th reunion in September :)

THE HOUSE OF DARWIN
by Arlene and Chato Alonsagay 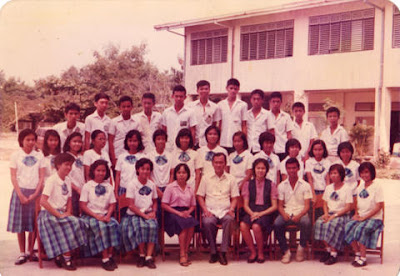 The four houses of QueSci:
All equally gifted, as their names imply
Darwin, Curie, Edison and Einstein
Each has a unique character by which they are defined

In the House of Darwin the brave do dwell.
Their daring and nerve is too much even for hell.

The of ’83 dared to form their own language
And spoke in a foreign tongue,
Ananab Namow, Amat, Nisnapapap, Konam,
In others faces these words they flung

They called it Salitang Darwin and the SD Dialect began
But listen closely, Tagalog rin naman.
Pronounced in reverse the meanings are the same,
This way they can gossip and later disclaim.

In the face of danger such as exams
The of ’83 was trained for such jams;
With hand signals known only to con-men
They whizzed through quiz all items 10.

On one unfortunate day in Social Studies,
A surprise quiz was cast upon
The room was filled with creepy silence;
You can here the movements of photon

Spearheaded by the group of Marlon and Kenneth,
The Solar-Powered Air-Conditioning Unit was presented
They kept it in a black box quite proudly,
but the case looked suspiciously
Like the suggestion box at the lobby

Mushroom Propagation
by Liza, Irma, Arnold, Doods and Chagay
A lot of shrooms they had to try; a curious variety though
Made one see colored unicorns and sounds seemed to echo

But one legendary vision that only a magic mushroom can conjure
Was of Ms. Gollena’s face, filled with fury ready to rupture
So furious with the class she was, her hands in the air poised to strike
"Kung may kidlat lang ako, kikidlatan ko kayo!"
She roared, very Thor-like

At that very moment there was a roll of thunder,
Perfect comedic timing but no one dared to utter

Loyal soldiers were the of ‘83
Remember CAT, where discipline was priority?
When in attention, blinking was punishable by death
Such was the impression of Ruby, a true model cadette

Even when vertigo struck her she didn’t falter at all
With all the dignity she could muster, she muttered
“Sir, requesting permission....to fall!"

Roco is a good, mature and gentle person.
And though he had every reason,
he was not the sort who tried to get even.
Once while he was walking along the covered catwalk,
He was heckled relentlessly by the class jock,

Though it would’ve been nice to hit the jock in the head
He kicked the post instead.
But that day for him was just too tough
For when he kicked the post, the heel of his shoe fell off

Ebon-ni…An-to-nee! A catchy tune that gets stuck in your brain
Leaves an impression like Anthony,
who would not be caught looking plain
Like the vision that he seared in everyone’s mind
When he went to the prom in a costume he designed
Looking like a Grecian god, with sexy strap sandals to match
He was indisputably the goddess of the batch

Even when the impending days of exam started to loom
They found ways to chill; oblivious of their doom
Instigated by Lhet, all notebooks were to be closed
The lazy majority outnumbered
the studious minority who opposed
They would break into a song as Edna strummed her guitar
They even played basketball, while other houses studied from afar

Alas! The class successfully did graduate
They left the House of Darwin to live their lives in separate
And after twenty-five years the of ’83 meet again
No longer girls and boys, but accomplished men and women

Ha!! I like the signals for the answers on the quiz ;-)

It's so funny that you had a "language" for your exams!

I would forget all the various scratches and still fail.

Hope the reunion is great!

There is no way I'd remember all that. I'd flunk the exams. ;)

I love that...very creative!
I hope it was awesome.

Thats pretty cool, do you still remember your lanquage?

Yea, I wouldn't have been able to remember all the signals.

Thanks for posting the article in your blog...I'm honored (and so does my sister)! Sure brings back memories, eh? Wish you could join us on Sept 20.