"Fight" over Beckham's Jersey - What Are These Parents Thinking? 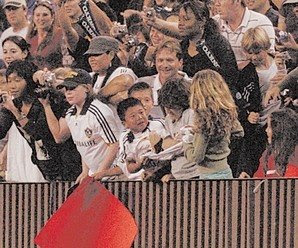 In case you have not heard or read of the story, the link to Honolulu Adverstiser is here. I suggest you read it first so you'd know what I am talking about. Then you'll understand why I am so disappointed (bordering disgusted) with the parents of these who boys who both wanted to own the jersey that David Beckham gave away. I can understand that these kids are kids and it's very important for them to have that jersey of the sports idol they have. I will give them a break. Even though I don't agree that it's that important - for them it is. But you see, the parents need to take this opportunity to teach them the value of sharing, or of friendship, and that there's more to life than Beckham's jersey.

What I can't understand is how the parents are handling this. They are now talking lawyers! What? Over a jersey? Puh-leez.... This has gone too far!

My main concern is "what are these parents teaching their kids in all these?". Whatever happened to the word "sharing" or "conflict resolution" - nada! What these kids are learning is that when things don't go the way you want to and you think you are right, you need to hire a lawyer!

Another thing that bothers me about this is the fact that this happened in Hawaii. Isn't Hawaii supposed to be full of ALOHA? What ever happened to to the aloha spirit? Oh, shame... what a shame.... I almost didn't blog about this, except that as I parent my blood is boiling as to how these parents are handling this situation. And so I must voice out my opinion.

Granting these parents want to teach their kids "to stand up for what they believe is right". Or to stand up for their right. But that kind of teaching is for certain moral values (something that involves the 10 commendments or the likes of it), like when someone asked them to lie and their conviction is not to lie, then they stand up for what they believe in. But these people need to put this situation in perspective - it's a jersey they are fighting about! Granting it is David Beckham's jersey - it's still just a jersey and not worth ruining friendships or any type of civil relationship. Maybe they could have approached this in a different way, like maybe encouraged the two kids to both write a letter to Beckham, explain the situation, and maybe see if he'll send another jersey so each of them can have one. It was a great opportunity to teach a "win-win" goal to a conflict resolution, instead of litigation.

But since it has already gone this far, I like what Lalas, president and general manager of the Galaxy, suggested - "My suggestion is that the judge get a pair of scissors, cut the thing in half, and give half to each. " I say that sounds like what the wise King Solomon would say.
Posted by Liza on Maui at 10:28 PM

Email ThisBlogThis!Share to TwitterShare to FacebookShare to Pinterest
Labels: in the news

I happen to live in Honolulu, Hawaii and read yesterday's front page with disappointment and disgust. The parents chose to teach their children lessons of selfishness and idolatry. This was an opportunity to teach the boys that one considers others rather than self; "life isn't fair", as we have all heard; how to resolve conflict. I know that my actions speak loud and clear to my children and set an example to them all the time (even when I blow it). Unfortunately, this will end up on the Today show. As far as the aloha spirit, it is alive and well and does not reflect the kindness of many of the people in Hawaii.

Wow. If my kid acted like that, i would auction it off on ebay and donate the money. Disgusting.

People are so selfish. That's crazy for the parents to get lawyers.

What happened to esteeming others better than ourselves?