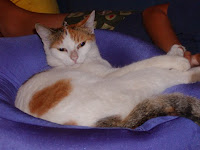 Aloha ... my name is Bob. That actually is a short for Bobbie, which actually originated from the name Bobcat .. you know, as in the machinery BobCat.

The name Bob was given to me by G when they adopted me from the pound together with my sister, Gus. G was just 6 years old then, and his parents asked G what he wanted to name the the cute little kitten (that's me). Without hesitation he said "Bob", you know.. BobCat (yes, he was obsessed with machines at that stage of his life).

I am guest blogging here on Liza's Eyeview because she's very sleepy right now. Good thing Sunday Scribbling's prompt this week is about name. I took that chance to introduce myself. And while i am on it, I might as well introduce my sister too.

My sister's name is Gus. Cute name for a cat, eh? Doesn't that just remind you of the cute little mouse on the Disney version of Cinderella? The truth is, Gus is not her real name, or at least it's not what she' supposed to be named with.

Since G named me w 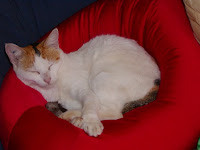 hen they adopted us, N named Gus. But it was not Gus that she said she wanted to call her. It was actually "Felicia". Wow, we liked it. Such an elegant name for a cat.

But then, when B (the Dad) brought us to the Vet for "healthy kittens first check up", and the nurse asked B how to spell my sister's name, B immediately changed the Felicia to Gus. You see, he couldn't spell Felicia (yes, he's dyslexic), and since I got a three letter name, B also gave her a 3 letter name.

Aaaahhhh (yawn) - it's late at might and my sister Gus is already asleep. I think I'd do the same. Meow!

This is darling - Bob is quite the writer :)

Very cute perspective on the prompt! Who knew cats could be so literary?

Cute!! And I think Bob and his sis are splendid looking creatures!

Gorgeous pussy cats! Nice to meet you Bob, and Gus! I hope Liza has got some sleep!

What lovely cats and litereary too!