Arnel Pineda's Journey Inspires Me - Then Sings My Soul 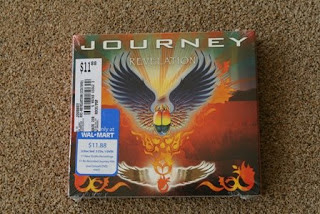 Yes, I finally bought the CD Album of Journey - at Walmart! It's a great deal - the package comes with 2 CDs and 1 DVD for $11.99. My kids are now hooked to it - I mean the songs in it. My son said he can't get the song "Don't Stop Believin'" out of his mind - he keeps on singing it :) (yes son, that's the plan - I want you to know that whatever happens, you shouldn't stop believen') 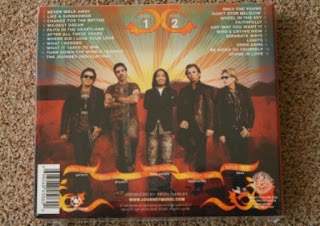 The "new" Journey Band, which is actually the original Journey with a new lead singer has a soft spot in my heart. I know you already guessed why - because Arnel Pineda, the new Journey lead singer, is from the Philippines. But more than that, I think what really touches me about him is his life story - how he lived the song "Don't Stop Believin'". The Sunday Morning interview at CBS News was quite touching in the end when he talked about his mom (who passed away when he was a teenager). Yes, I was teary eyed watching it when he talked about his mom's influence in his life. Here, watch it too. Make sure you watch until the end (thank you Flipland for posting about this):


Now if you enjoyed that video, you'd be interested to read this post HERE about the actual interview at the American Embassy. For non-Filipinos who are watching the show, they probably were wondering why the heck he was asked to sing by the consul or interviewer. But for those who's been in the Philippines or are from the Philippines, they know that getting a "tourist visa" from the Philippines to the US is so difficult - close to impossible. The interviewer had to ask him to sing to cover his "ukole". If you have not read it yet, I suggest go there at Flipland (yes, click here) and read it.

Here's a photo of the article at People Magazine (click the photo to make it larger): 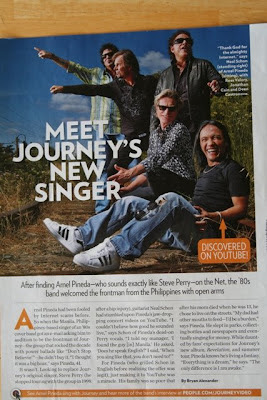 I love it that people are talking about this. Vicky Courtney from Virtue Alert posted about Arnel and Journey and there you will also find the Youtube video on the Interview at Ellen D.

And here's the finale - the video and lyrics of DON'T STOP BELIEVING (dedicated to my son G):

Strangers waiting, up and down the boulevard
Their shadows searching in the night
Streetlight people, living just to find emotion
Hiding, somewhere in the night

Working hard to get my fill,
Everybody wants a thrill
Payin anything to roll the dice,
Just one more time
Some will win, some will lose
Some were born to sing the blues
Oh, the movie never ends
It goes on and on and on and on

Dont stop believin
Hold on to the feelin
Streetlight people

This post is my week's entry on Then Sings My Soul. Go to Amy's Blog for more. Happy weekend everyone!

Email ThisBlogThis!Share to TwitterShare to FacebookShare to Pinterest
Labels: Flashback, Make A Difference

I love that song! Listening to it took me back to my younger days when I used to sing it at the top of my lungs. Thanks for the fun flashback!

Thanks for linking to Flipland. As I mentioned in my post update: thank goodness we did not run over the visa officer during the relay race.

I remember when you first told me about Arnel and his story. Went out and bought the disc tonight. He's BETTER than Steve Perry! Love the songs...love the DVD. FYI..."Journey: Escape" was my first album ever. Funny, huh? Thanks for sharing...

I got this, inspired by your post!! Showed it to my husband, who has not given it back!! Wahhhh. Obviously this is a good CD. Thanks for the tip, Liza!