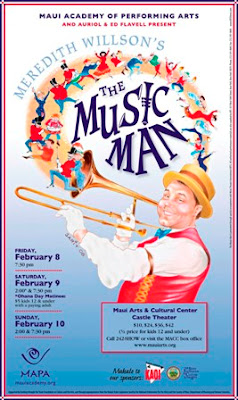 Last Friday we watched the stage show "The Music Man" at the MACC. Not only was the show very entertaining, it was a very special show to watch because our of best friends Kenny and Cassie, and the Kepler family. You see about 22 years ago, Kenny played the role of Winthrop while Cassie played the role of Amaryllis. Now, they are married and have 2 wonderful sons :)

Here's what Maui News wrote about it:

Winthrop and Amaryllis were Kenny Kepler and Cassie Taylor, in the last performance of “Music Man” on Maui in 1986, back when MAPA was still Maui Youth Theatre at Pu‘unene.

Kenny and Cassie met dancing the roles at age 11. Kenny was at Iao School; Cassie was at Kihei. There was an instant spark between the two even at that age, Cassie says. For Cassie, it was one of her first and only times in theater, but for Kenny, it was all in the family — his dad and brother were also in the production.

“Once the show ended, we broke up, but we were still friends,” Cassie says. Both went on to Baldwin High School, and the summer before their senior year, they started dating seriously. Today, they’ve been married 12 years and have two sons, ages 8 and 5.

Although Kenny, a physician, and Cassie, a teacher, are not in the show this time, “We’ve got opening night tickets for the whole family!” Cassie says. “ ‘The Music Man’ is a special show for us … When I write my Valentine’s card, I write it to ‘my Winthrop’!”

You can read the full Maui News articles on The Music Man here and here.