I have been thinking a lot about the California firestorms (who isn't?). For me, it's a disaster beyond imagination. Looking at the photos on the news, it reminds me of hell - hot, burning, miserable. 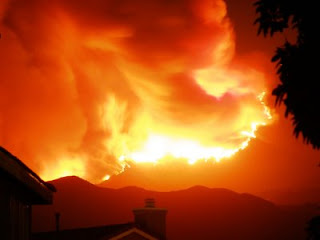 Photo is from this flicker site.
I was very tired last night, but I wasn't going to complain. As I sat on our couch feeling exhausted, I can''t help but think of the many firefighters in California who are extremely exhausted at this time.

My brother R and his family live in the LA area. Thankfully, they are safe. After I talked to him on the phone, I thank God that they are safe. Then a thought crossed my mind. How about those who's house were reduced to ashes? I wonder how many "good" people are affected by these? The answer is thousands ... thousands of them.

So, "when bad thing happen to good people", how do we react? I Googled that phrase and found some articles written on it. The most famous one is that written by Harold Kushner with the same title "When Bad Things Happen to Good People". Then there's an opposing point of view presented by Rabbi Yitzchok Kirzner as he explain the fallacy of Mr. Kushner's article.

The article that brought enlightenment to me though is the one written by Pastor David Legge, again with the same title "When Bad Things Happen To Good People". In this exposition, he used the story of Job in the Bible. And that to me is the ultimate example of this issue.

I am thankful that my family and I are safe here on Maui away from the fire. But my heart goes out to the many who are affected by the fire. My prayer is that they will have the faith, the wisdom and the resiliency of Job. I pray that they would have the peace that Job had when he proclaimed:

"Naked I came from my mother's womb,
And naked shall I return there.
The LORD gave, and the LORD has taken away;
Blessed be the name of the LORD." (Job 1:21)

It's hard to think of words to say to someone who's been directly affected by these firestorm. I guess all we can do is pray, and if there's any need for tangible support, let's give: a hug, a shoulder to cry on, food to eat, a place to sleep ... whatever we can give...

This tragedy in CA seems so ominous to me too. Thanks for that post to remember to be there for others in times like these.

This is just tragedy and almost hard to believe. Even as a Norwegian, this comes close to me as my American wife is visiting her family although she is in NY.

You are always so thoughtful in thinking of others in your posts! I love your heart. :)

Thanks for sharing these thoughts. It's easy sometimes to not think about the hardships and difficulties that others are facing because we are not experiencing the same thing. But we always need to look at situations like this as God sees them, with compassion. Thanks for the reminder.

Not a day goes by that I don't think about those who have lost their homes due to the firse in California. Thank you for sharing your post!