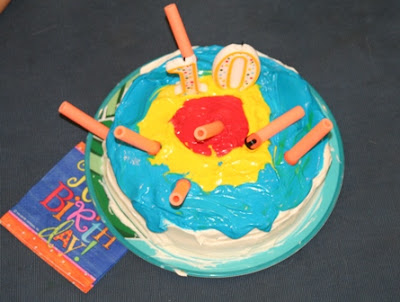 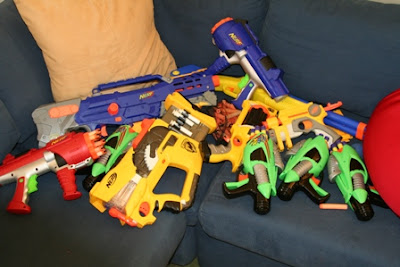 I wish I could post a lot of photos of your Nerf Gun Birthday party. But out of respect for the privacy of our guests (I didn't ask the persmission of their parents to post their photos), I decided to just post a photo of the cake and the Nerf Gun arsenal they had on the party. We bought each boys (9 and 10 yr olds) a small Nerf Gun. They used it during the party and then it became their birthday giveaway too.

Aside from each individual Nerf Guns, G owns a tremendous collection of Nerf Guns, and so they used those too. The boys had a blast playing Nerf War games (boys will be boys, right?). Aside from the Nerf war, they also swam at the pool. It was a fun birthday celebration for G :)
Posted by Liza on Maui at 9:30 PM

What a creative birthday theme! I like how you put the nerf "bullets" on the cake - very cute!