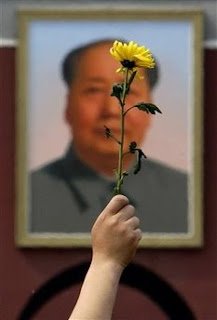 The government announced an official mourning period starting Monday and asked China's 1.3 billion people to observe three minutes of silence starting at 2:28 p.m. — exactly one week after the quake killed an estimated 50,000.

* Photo and news excerpt from Yahoo.com
Posted by Liza on Maui at 11:04 PM

Email ThisBlogThis!Share to TwitterShare to FacebookShare to Pinterest
Labels: in the news

How devastating really. I will be praying for everyone effected!