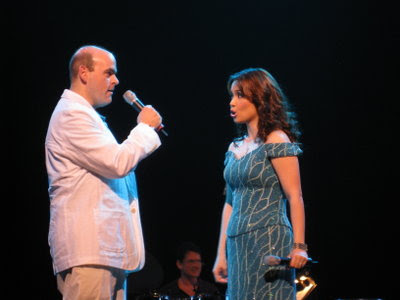 The first song was a "A Whole New World" from the Disney movie Aladdin. Since it's a duet, Lea asked for volunteer. I noticed two hands in front immediately rose. I am not sure how many were in the back. Lea told the guy in white suit to come up. Turned out, his name is Guy. What a lucky Guy!

Guy sang "A Whole New World" with Lea. We could tell he's nervous because he sang ahead of the cue and was a little out of tune at first - but he was able to recover and sang well in the middle part and towards the end. Lea was very gracious and helped him get into the tune. It was an experience of a lifetime. I salute Guy for volunteering. He looked good up on the stage with Lea. I found out later that he's a big fan of Lea and flew all the way from the mainland to watch the show. Fabulous!
The truth is I did not bring a camera that day because I know taking photos is not allowed at the MACC. I didn't know about the dinner with Lea until later so I knew I wouldn't get a chance to take a photo with her. The photo of Guy and Lea was taken by a couple who are also a wonderful fans of Lea. Lea allowed a shot without a flash to be taken so that guy would have a souvenir and Brad and Kamille took the photo for him. They sent this to Lea's Fans Website and I used these here on my blog with badabing2's permissions :). Thank you Brad and Kamille for the photos.

OK, I've got to log off so wait for Part 4, hopefully the final segment of this post on Lea's concert on Maui. Coming up soon - Lea sang "Taylor, the Latte Boy" it was so cute! Stay tuned.

Hi, this is badabing2, just a correction, it wasn't me who gave the permission to post the picture but arkitekfhc. Those pictures were sent directly by Brad and Kamille to arkitekfhc.

Opsss... I apologize for the mix-up bing. And yes, I asked artitekfhc for permission to use some photos. Thanks :)

I'm not familiar with her, but she is pretty. I love that dress in the first photo.

I'm not familiar with her, but she sure is pretty, and I love that dress in the first photo.

Hello, I'm the blessed Guy that Lea choose to sing with her on Maui. It was the most amazing experience of my life, and one that I'll never forget and remember with joy! Thanks for writing about it and your review of our duet!